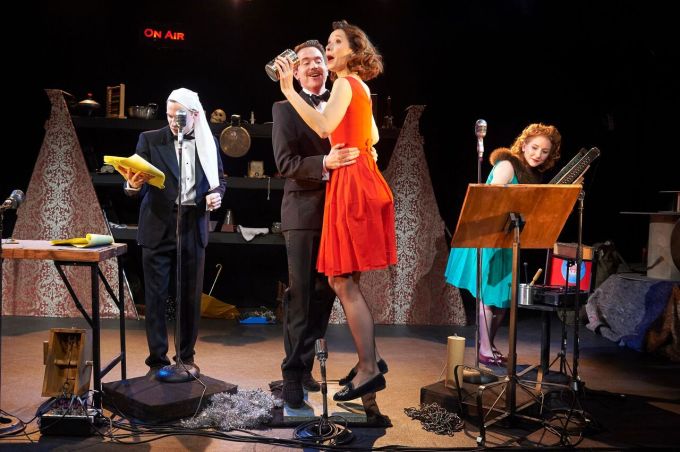 The Fitzrovia Radio Hour are an acclaimed troupe who re-work vintage plays and write their own works and adaptations in the style of 1940’s radio drama, complete with cut-glass accents, live sound effects and plenty of nonsense.

From the start we are let into the secret that there has been rivalry and jealousy over the part of Scrooge, and the actor about to play the eponymous role has been injured in mysterious circumstances at the nearby Old Vic. However, the show must go on, though one cast member is visibly distraught, and Ernest Andrew takes his place.

Of course, there are more ghosts than the cast bargain for and the inevitable mayhem ensues. 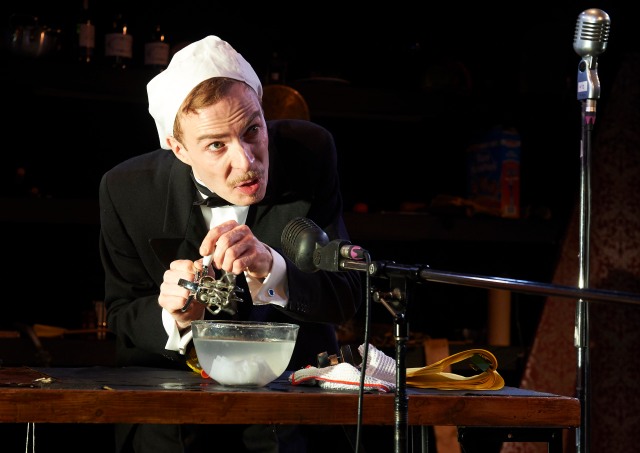 The whole production is delightfully silly, very slick and wonderfully energetic. Beautifully choreographed, we see the actors jump to the microphones taking various characters in Dickens’ story, and create the splendid sound effects with a vast array of props, ranging from cloth in water, to cabbage in a boxing glove to coconut maracas.

Ridiculous product placement advertising, cast dynamics and a crackling script keep the pace moving as well as the visible theatrics, and arch reference is frequently made to the venue in which the show takes place.

The result is a highly amusing, joyful romp guaranteed to bring Christmas cheer.

I am Fiona-Jane Weston and as well as being a performer myself (see website), I write reviews of and features on shows, mainly on the London cabaret and theatre scene. I have worked in theatre for many years, but decided to embark on a new direction in cabaret in 2009, when I produced 20th Century Woman: The Compact Cabaret. Not wanting to neglect my love of spoken word, particularly drama and verse, I made the conscious decision to include these elements in the programme, as well as wonderful songs, to tell the story of women's changing status and preoccupations throughout the 20th Century and up to now. I was invited to audition for the renowned Cabaret Conference at Yale, run by the late legendary Erv Raible, and that was thrilled to be one of only 26 accepted that year, where I was taught by the masters of the genre. Amanda McBroom (composer of the Bette Middler hit "The Rose" and the poignant "Errol Flynn"), Laurel Massé, original member of Manhattan Transfer, Sally Mayes, Tony Award nominees Sharon McNight and Tovah Feldshuh, and New York cabaret veteran Julie Wilson were all on the faculty. We were also treated to the musical direction of Alex Rybeck, Hubert Tex Arnold and the now late Paul Trueblood. With the benefit of their insightful teaching and great encouragement, I took my show to The Duplex in New York, where I was delighted with the response. Since then, I have produced Loving London: The Capital Cabaret, using the same format of songs, poetry and drama, in various London venues, including Leicester Square Theatre and The Crazy Coqs. 2014, the centenary of World War 1, saw the launch of Wartime Women: the Khaki Cabaret to a sellout house at St. James Theatre, London, garnering great notices, including from The Times and Musical Theatre Review. I have since been touring the show to Belgium and throughout the UK. I hope these reviews and interviews entertain and educate at the same time, and if please do leave comments in the box. It's great to engage in a conversation about the Arts. Fiona-Jane Weston
View all posts by Fiona Jane Weston →
This entry was posted in Theatre Reviews and tagged A Christmas Carol, Alix Dunmore, Charles Dickens, Dorothea Myer- Bennett, Michael Lumsden, Samuel Collings, The Fitzrovia Radio Hour, Vaults Theatre, William Findley. Bookmark the permalink.