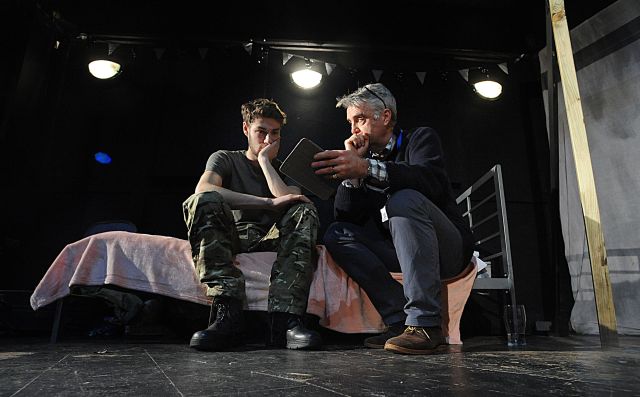 Tom Page and Tim Marriott in rehearsal for Shell Shock

Shell Shock is a powerful and acutely-observed new one-man play soon to tour the UK describing a young soldier’s difficulties in settling back into civilian life, and the effects on his mental health and family life.

Originally created at Eastbourne College, former pupil turned professional actor Tom Page tells one soldier’s story of coping with Post Traumatic Stress Disorder. After serving in Iraq and Afghanistan, Tommy Atkins’ observations on life on civvy street are poignant, frequently comic and always moving. His over-emotional responses to post office queues, a trip to Ikea, his relationships and family lead to alienation and anger.
The story, adapted from the original novel Shell Shock: The Diary of Tommy Atkins, highlights the work of charities such as Combat Stress and Help For Heroes and was described by General Sir Mike Jackson as: “a vivid and compassionate portrayal of an ex-soldier having to cope with post-traumatic stress syndrome, and it shows just how important is the work of charities such as Combat Stress”.

Shell Shock is written by Neil Watkin and adapted for the stage by Tim Marriott and features a filmed introduction from Squadron Leader John Peters, the former RAF Tornado pilot famously shot down and held captive by the Iraqis in the first Gulf War.

How did the project come about?

Neil Watkin (writing as Neil Blower) is a former soldier who returned to the UK after several overseas tours and after leaving the army began to demonstrate signs of PTSD. As part of his treatment he was advised to write a diary. Into this work he amalgamated stories of other veterans with similar tales to tell creating a fictionalised account of a generic ‘Tommy’. The resultant diary/novel was published and received positive responses including General Sir Mike Jackson comments: “a vivid and compassionate portrayal of an ex-soldier having to cope with post-traumatic stress syndrome, and it shows just how important is the work of charities such as Combat Stress”. Having recently written and produced a number of issue related works for the Brighton Fringe and on tour, I was approached by the publisher to write a stage adaptation.

The novel you have adapted is essentially a diary. What were the challenges in dramatising it for the stage, and how were you able to overcome them.

Written in the first person as a direct address piece, it wasn’t immediately obvious how this could be a stage drama. However, I knew about Alan Rickman’s adaptation My Name is Rachel Corrie, a blog written by a young American woman killed in Palestine by an Israeli bulldozer, and subsequently could envisage how a direct address piece could work. The humour of the original diary, the guttural language, Neil’s excellent ear for dialogue and the fact that I was working with an extraordinary young actor, Tom Page, ideal for the role, meant that the pieces quickly fell into place.

The first problem was that this is a written diary, so we made the choice to change this to a video diary to allow Tom to speak to the audience and infuse the action with cinematically screened footage to reveal his subconscious and colour the flashbacks and nightmares that any PTSD sufferer experiences. 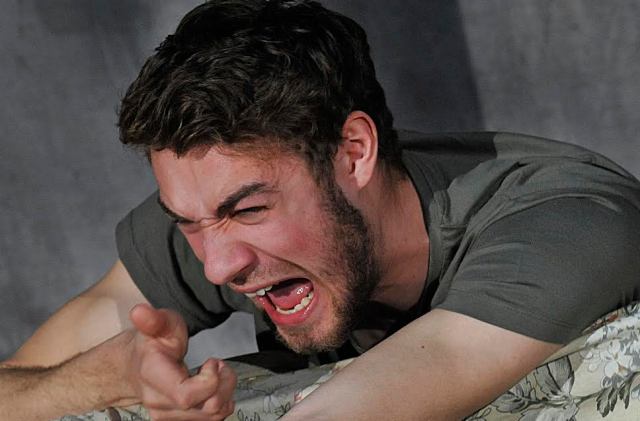 How were you able to secure the funding to mount a full production and tour it?

We are LIBOR funded. The UK government has recently been highlighting reforms in mental health care, particularly with reference to veterans. We therefore applied to the LIBOR fund with the support of Anglia Ruskin University, who are to evaluate the project and several related charities such as Help for Heroes, Combat Stress and PTSD resolution.

You are touring to a range of spaces, each of different shapes and sizes, and each presenting a particular challenge. How will you adapt the set to suit such an array?

We have an expanding set of doorways and partition walls suggested by wooden frames, which can be tailored to each venue. The walls and empty door frames are in part meant to be suggestive of his deconstructed mind but also of his nightmare shopping experience in Ikea!

The piece is imagined largely in Tommy’s home and bedroom, his mother represented by a cottage sofa, his father by a leather arm chair, his fiancée by the bed – so these are the key areas with stage space defined by a floor cloth, which can expand for larger venues.

What drew you to the project?

I immediately identified with the central character. The diary drew me in straight away and I was fascinated by ‘Tommy’- the trauma he experienced and his denial as he falls into PTSD really impacted on me. The strength of the script, the remodelling of the diary into stage form was amazing. I could hear the voice of ‘Tommy’ so clearly, and what a challenge! 90 minutes on stage alone… got to be done!

You have a very different background from Tommy Atkins. You are highly educated, while Tommy left school early and has difficulty reading and writing. How do you identify with the character?

Not so sure about highly educated! I didn’t join the army at 16, I finished school with A levels, but have not gone on to college or university and actually experienced some learning difficulties at school and could really identify with the problems Neil faced and that he has expressed as ‘Tommy’. Like him, I have had to learn to mask such difficulties and deploy strategies to overcome them, so although I recognise I am very different to ‘Tommy’, there are similarities I could draw on in creating the character.

Do you or your family have any military background?

I served in the cadets as a teenager and have to say did not enjoy it!

I have been lucky to gain some professional experience as a teenager in small parts on TV and in commercials and have managed to perform in professionally produced plays at the Brighton Fringe, in Eastbourne and on tour – I just hope to keep developing this kind of powerful work. 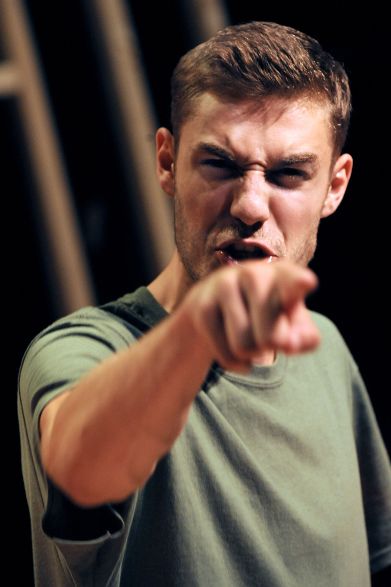 I am Fiona-Jane Weston and as well as being a performer myself (see website), I write reviews of and features on shows, mainly on the London cabaret and theatre scene. I have worked in theatre for many years, but decided to embark on a new direction in cabaret in 2009, when I produced 20th Century Woman: The Compact Cabaret. Not wanting to neglect my love of spoken word, particularly drama and verse, I made the conscious decision to include these elements in the programme, as well as wonderful songs, to tell the story of women's changing status and preoccupations throughout the 20th Century and up to now. I was invited to audition for the renowned Cabaret Conference at Yale, run by the late legendary Erv Raible, and that was thrilled to be one of only 26 accepted that year, where I was taught by the masters of the genre. Amanda McBroom (composer of the Bette Middler hit "The Rose" and the poignant "Errol Flynn"), Laurel Massé, original member of Manhattan Transfer, Sally Mayes, Tony Award nominees Sharon McNight and Tovah Feldshuh, and New York cabaret veteran Julie Wilson were all on the faculty. We were also treated to the musical direction of Alex Rybeck, Hubert Tex Arnold and the now late Paul Trueblood. With the benefit of their insightful teaching and great encouragement, I took my show to The Duplex in New York, where I was delighted with the response. Since then, I have produced Loving London: The Capital Cabaret, using the same format of songs, poetry and drama, in various London venues, including Leicester Square Theatre and The Crazy Coqs. 2014, the centenary of World War 1, saw the launch of Wartime Women: the Khaki Cabaret to a sellout house at St. James Theatre, London, garnering great notices, including from The Times and Musical Theatre Review. I have since been touring the show to Belgium and throughout the UK. I hope these reviews and interviews entertain and educate at the same time, and if please do leave comments in the box. It's great to engage in a conversation about the Arts. Fiona-Jane Weston
View all posts by Fiona Jane Weston →
This entry was posted in Features - Theatre and Cabaret News. Bookmark the permalink.