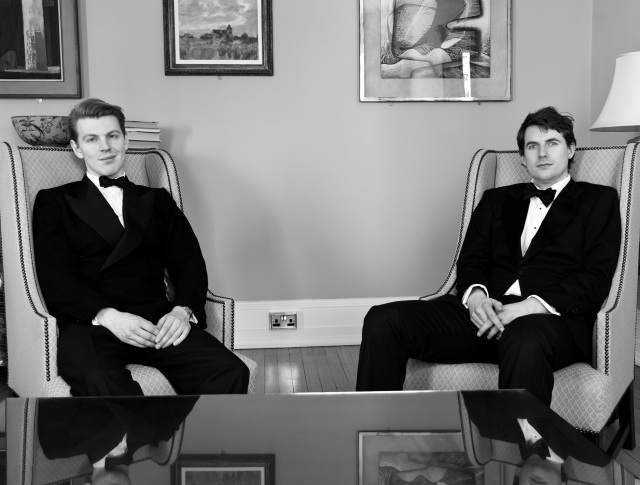 Bounder and Cad‘s alter-egos, Adam Drew and Guy Hayward, are in reality two very personable young Cambridge graduates having found themselves on the cabaret circuit almost by accident. They met as students, sang in choirs, put together a song for a friend’s party, which people enjoyed, and things went from there. While acting with Cambridge Footlights, Adam learned that the price of tickets for the May Ball were reduced for performers, and that set the ball rolling.

Adam is the lyricist of the two, with Guy acting as editor and marketing manager. For the most part, they produce their own updated lyrics to songs by Noel Coward, Cole Porter and Richard Rodgers. Occasionally, they also compose original music.

Their inspiration largely comes from stories and celebrities in the news (hence a song about Prince Harry which went viral on youtube), but often from the people they are singing for. This might involve some quite detailed research, such as the somewhat daunting commission to perform a satirical take on Greece’s financial crisis at a Grexit-themed lunch for international bankers, and where Russell Taylor, Telegraph satirist of the ‘Alex’ cartoon fame, was in the room.

Before long, they were being invited perform in such places as Highclere Castle and the 10 Downing Street Christmas Party, where a friend was working and a band fell through at the last minute. Adam says: “The pay was terrible, but hard to turn down”. They wrote a gentle coalition spoof on Cameron and Clegg to the tune of Me and My Shadow, which Adam thought he had better get clearance for. Apparently, it went through many different levels via email, until they were told ‘no’ by Cameron’s private secretary. This was a let-down, but they did the gig and after Cameron and Samantha left the party , the staff really wanted to hear it. Adam was initially unwilling, having been vetoed by the PM, but Guy was up for it. Interestingly, although Adam writes the cheeky lyrics, it would seem he is the more reticent and Guy is the one who grasps each opportunity to perform. 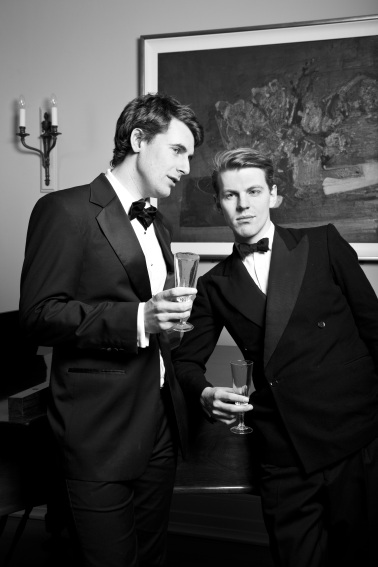 Their interest in the cabaret form came about through interesting angles. Lyric writing appeals to Adam, a classics scholar, because of the compressed nature of getting an idea across in a few lines. He says: “I find it plays its part.. reading Latin, especially Horace, at the risk of sounding pseud, because it’s so wonderfully compact. .. I love a line where every syllable has a purpose, creates an image, tells a story and achieves a twist.”

Whereas Guy, a music graduate, wrote his PhD thesis on the psychology and anthropology of music, specifically the way the presentation of music has varied from the generally accepted Western approach, where the artist is expert, to community singing where the audience is very much expected to join in. Cabaret, of course, spans the two.

Understandably, they are becoming known as the successors to Kit & the Widow and Fascinating Aida, and are appearing at The Pheasantry 3rd September in what promises to be an amusing evening.
https://www.pizzaexpresslive.com/whats-on/bounder-cad-pizzas-and-pizzazz
Fiona-Jane Weston

I am Fiona-Jane Weston and as well as being a performer myself (see website), I write reviews of and features on shows, mainly on the London cabaret and theatre scene. I have worked in theatre for many years, but decided to embark on a new direction in cabaret in 2009, when I produced 20th Century Woman: The Compact Cabaret. Not wanting to neglect my love of spoken word, particularly drama and verse, I made the conscious decision to include these elements in the programme, as well as wonderful songs, to tell the story of women's changing status and preoccupations throughout the 20th Century and up to now. I was invited to audition for the renowned Cabaret Conference at Yale, run by the late legendary Erv Raible, and that was thrilled to be one of only 26 accepted that year, where I was taught by the masters of the genre. Amanda McBroom (composer of the Bette Middler hit "The Rose" and the poignant "Errol Flynn"), Laurel Massé, original member of Manhattan Transfer, Sally Mayes, Tony Award nominees Sharon McNight and Tovah Feldshuh, and New York cabaret veteran Julie Wilson were all on the faculty. We were also treated to the musical direction of Alex Rybeck, Hubert Tex Arnold and the now late Paul Trueblood. With the benefit of their insightful teaching and great encouragement, I took my show to The Duplex in New York, where I was delighted with the response. Since then, I have produced Loving London: The Capital Cabaret, using the same format of songs, poetry and drama, in various London venues, including Leicester Square Theatre and The Crazy Coqs. 2014, the centenary of World War 1, saw the launch of Wartime Women: the Khaki Cabaret to a sellout house at St. James Theatre, London, garnering great notices, including from The Times and Musical Theatre Review. I have since been touring the show to Belgium and throughout the UK. I hope these reviews and interviews entertain and educate at the same time, and if please do leave comments in the box. It's great to engage in a conversation about the Arts. Fiona-Jane Weston
View all posts by Fiona Jane Weston →
This entry was posted in Features - Theatre and Cabaret News and tagged Bounder and Cad, cabaret, fiona jane weston, Highclere Castle, London cabaret, London cabaret reviews, The Pheasantry. Bookmark the permalink.