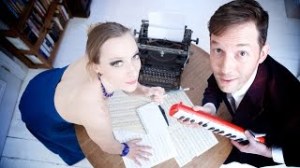 Sarah-Louise Young and Michael Roulston return to the Crazy Coqs for a 3 night run of their original and funny show Two Faced. Read my review here: 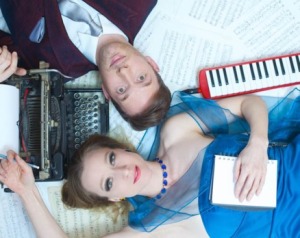 The pair are regular fixtures at the Edinburgh Fringe and have toured internationally with another joint show Julie Madly Deeply, which also transferred to the West End.

These two, each very talented and well known in their own right, make a particularly successful duo. With their easy rapport, gently poking fun at one another and clever lyrics, they have created an interesting and entertaining show comprising totally of their own work, looking at the banalities of modern life and juxtaposing them with modern-day obsessions such as aging, social media and toy boys.

The item I found funniest, and certainly related best to, was Please Don’t Hand Me Your Baby. With its twist of intention, taking the listener down one path and then exposing a lacerating truth, this song is both witty and refreshing.

There is also the welcome inclusion of comic character Bernie St Clair – an American diva of a certain age.

Inevitably, some songs work better than others, but for my money, the best of them added an edge of poignancy. There were only two ballads, and both stood out, not only because they were different from the comedic work, but because they displayed a maturity both musically and in subject-matter. The Letter again led the listener in one direction, and then surprised with a bitter yet sad twist, whereas Over You revealed depths in Young as a performer the rest of the programme hides.

I would like to see more of that sort of revelation of their real selves, moving us without losing any of the humour and winning charm. As they develop their work, I am hoping they might show a touch more bravery in this regard.

It is encouraging to see original material presented well in an artform often saturated with cover songs, and long may it continue. This work was first workshopped in St James Studio last year and has undergone some alterations. Further tweeks were made just before the show began the night I saw it.  I am interested to see how life, especially now Young is about to turn 40, will shape the direction of their future writing.

I am Fiona-Jane Weston and as well as being a performer myself (see website), I write reviews of and features on shows, mainly on the London cabaret and theatre scene. I have worked in theatre for many years, but decided to embark on a new direction in cabaret in 2009, when I produced 20th Century Woman: The Compact Cabaret. Not wanting to neglect my love of spoken word, particularly drama and verse, I made the conscious decision to include these elements in the programme, as well as wonderful songs, to tell the story of women's changing status and preoccupations throughout the 20th Century and up to now. I was invited to audition for the renowned Cabaret Conference at Yale, run by the late legendary Erv Raible, and that was thrilled to be one of only 26 accepted that year, where I was taught by the masters of the genre. Amanda McBroom (composer of the Bette Middler hit "The Rose" and the poignant "Errol Flynn"), Laurel Massé, original member of Manhattan Transfer, Sally Mayes, Tony Award nominees Sharon McNight and Tovah Feldshuh, and New York cabaret veteran Julie Wilson were all on the faculty. We were also treated to the musical direction of Alex Rybeck, Hubert Tex Arnold and the now late Paul Trueblood. With the benefit of their insightful teaching and great encouragement, I took my show to The Duplex in New York, where I was delighted with the response. Since then, I have produced Loving London: The Capital Cabaret, using the same format of songs, poetry and drama, in various London venues, including Leicester Square Theatre and The Crazy Coqs. 2014, the centenary of World War 1, saw the launch of Wartime Women: the Khaki Cabaret to a sellout house at St. James Theatre, London, garnering great notices, including from The Times and Musical Theatre Review. I have since been touring the show to Belgium and throughout the UK. I hope these reviews and interviews entertain and educate at the same time, and if please do leave comments in the box. It's great to engage in a conversation about the Arts. Fiona-Jane Weston
View all posts by Fiona Jane Weston →
This entry was posted in Cabaret Reviews and tagged fiona jane weston, Michael Roulston, Sarah Louise Young, The Crazy coqs, Two Faced. Bookmark the permalink.