An Evening With Marilyn Maye 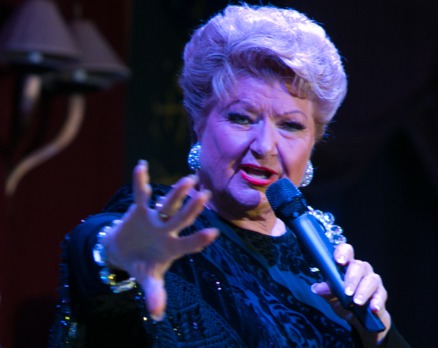 Eighty-six year old Marilyn Maye is no late bloomer- she has been practising her craft on stage for over 70 years. Her divorced mother, a pianist herself, gave her talented daughter singing and dancing lessons and took her on the amateur contest circuit in Kansas from an early age, during the time of the Great Depression. Her winnings provided a valuable source of income.

One of the prizes was a 13- week appearance on a radio show, which led to more or less continuous work on radio throughout her school years, singing requests from listeners and regularly singing with a big orchestra, fully preparing her for her later career with RCA Records.

After several years playing both small and large nightclubs, she was asked by the then famous TV star Steve Allen to guest on his TV series and her career finally hit big time. RCA signed her as a “commitment” singer – where Broadway producers would approach an artist to sing what they hoped would be the hit song from a forthcoming show. Two such songs that Maye treated us to at Crazy Coqs were Cabaret and Step to the Rear. The latter became the theme song for a car commercial, earning Maye a handsome fee over four years.

The show she has brought to London is beautifully programmed with a pleasing bookending of It’s Today, and includes a variety of styles ranging from jazz to pop to Broadway. Her voice is still powerful and flexible, allowing her to both sing delicately in Look to the Rainbow and bring the house down in Blues in the Night and several others.

Among the many standout numbers was a couple of medleys she sang at the beginning of the set comprising of Can’t Take My Eyes Off Of You, That Face, Your Smiling Face and I Love to See you Smile, and Get Happy, I Want to Be Happy, and Sometimes I’m Happy respectively.  Throughout each of these mini-sections, setting up a great party vibe, she employed different musical sounds and styles, effortlessly seguéing from a pop or big band feel to a sophisticated swing.

Visually, Maye’s gestures and movement are exquisite to watch and her strong use of eye-contact creates the illusion she is singing just for you.

I also particularly enjoyed the comic When I’m in Love, sung together with the inimitable Billy Stritch who accompanied her on piano along with Joe Pettitt on bass and Eliot Henshaw on drums, and the atmospheric Bye Bye Country Boy, highlighting Maye’s ability to tell a story through song.

It has been many years since her last visit to London, and her current show was greatly anticipated.  A performer of unparalleled polish and professionalism, she didn’t let us down.  Everyone yelled for more.

I am Fiona-Jane Weston and as well as being a performer myself (see website), I write reviews of and features on shows, mainly on the London cabaret and theatre scene. I have worked in theatre for many years, but decided to embark on a new direction in cabaret in 2009, when I produced 20th Century Woman: The Compact Cabaret. Not wanting to neglect my love of spoken word, particularly drama and verse, I made the conscious decision to include these elements in the programme, as well as wonderful songs, to tell the story of women's changing status and preoccupations throughout the 20th Century and up to now. I was invited to audition for the renowned Cabaret Conference at Yale, run by the late legendary Erv Raible, and that was thrilled to be one of only 26 accepted that year, where I was taught by the masters of the genre. Amanda McBroom (composer of the Bette Middler hit "The Rose" and the poignant "Errol Flynn"), Laurel Massé, original member of Manhattan Transfer, Sally Mayes, Tony Award nominees Sharon McNight and Tovah Feldshuh, and New York cabaret veteran Julie Wilson were all on the faculty. We were also treated to the musical direction of Alex Rybeck, Hubert Tex Arnold and the now late Paul Trueblood. With the benefit of their insightful teaching and great encouragement, I took my show to The Duplex in New York, where I was delighted with the response. Since then, I have produced Loving London: The Capital Cabaret, using the same format of songs, poetry and drama, in various London venues, including Leicester Square Theatre and The Crazy Coqs. 2014, the centenary of World War 1, saw the launch of Wartime Women: the Khaki Cabaret to a sellout house at St. James Theatre, London, garnering great notices, including from The Times and Musical Theatre Review. I have since been touring the show to Belgium and throughout the UK. I hope these reviews and interviews entertain and educate at the same time, and if please do leave comments in the box. It's great to engage in a conversation about the Arts. Fiona-Jane Weston
View all posts by Fiona Jane Weston →
This entry was posted in Cabaret Reviews and tagged Billy Stritch, cabaret reviews London, Crazy Coqs, Eliot Henshaw, fiona jane weston, Joe Pettitt, Marilyn Maye. Bookmark the permalink.

1 Response to An Evening With Marilyn Maye