Mister Meredith and Emma Ruth host a singalong show at the atmospheric George pub in the East End, Royal Vauxhall Tavern and other venues. Emma is also one of the Kitsch Kittens at the RVT. 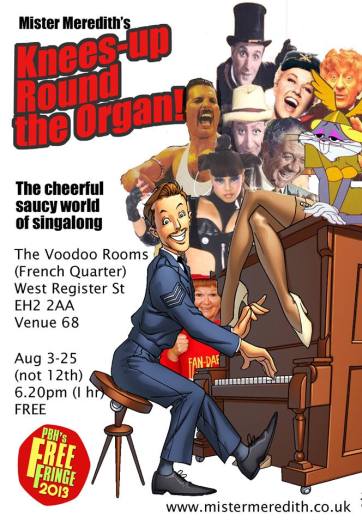 I must declare an interest here – Luke Meredith and I are mates. Also, he played for me (very beautifully, I might add) on my first one- woman show 20th Century Woman: the Compact Cabaret at The Pheasantry– so, of course I am biased!

But I just want to write about this, because although each are acts in their own right, Luke and The Kitsch Kittens often pair up together, and it’s such a fun show!

Now, we’re not talking serious cabaret here, or the sort of careful examination of the writing, nuances in the lyrics etc. that you see at the Crazy Coqs or St James Studio.  No, this frivolous and frothy – more of a guilty pleasure than a thought provoking, mind expanding evening. Perfect for a hot summer night or party where you just want to let your hair down.

At the Royal Vauxhall Tavern on the night I saw the show, The Kitsch Kittens came on first, comprising of two singers calling themselves Barbie and Sindy (alias Tamsyn Salter and Emma Ruth) singing sugary, sometimes angsty ‘60’s pop, linked together with terrible jokes, fab cossies and cutesy moves.  I loved it from the off.
It is a nicely shaped show, with very slight changes of mood, never allowing it to get sombre –it’s just not that sort of an evening. I liked the motorcycle medley best with Leader of the Pack and Terry. They also keep us engaged with different ways of interacting with the audience and tongue-in-cheek patter.

Luke, known as Mister Meredith, has a smooth, easy going style that is genuinely inviting and in a pub singalong setting, as it was at the George, he is sensitive to the mood in any part of the room and ensures everyone has a good time. He also has a very nice singing voice. Here, the show is a wartime Variety Bunker, with Knees Up Mother Brown, It’s A Long Way to Tipperary and others from that era.

At the RVT, the act is expanded with a potted history of singalong in our culture, looking at its development from nursery rhymes, football, war, weddings and funerals, church, and some songs of his own. The war songs are included, but there is also pop from the ‘70’s and ‘80’s, and requests are welcomed.

He alters the tone of the show to pitch it to the audience he has. It was somewhat fruity for the RVT, and I expect could be abrasive if the occasion called for it. At the George, with its old-time war theme, singing World War 2 favourites and bunting, it was gentle and charming. There is no entry fee there, and even tea and cake is provided! So please be generous when they pass the hat around.

Luke does similar singalongs at the Coach and Horses in Soho, so there are plenty of places to catch it. This is definitely not a night for the sniffy (though I bet they’d join in), but it is good fun, and hey – why not?

I am Fiona-Jane Weston and as well as being a performer myself (see website), I write reviews of and features on shows, mainly on the London cabaret and theatre scene. I have worked in theatre for many years, but decided to embark on a new direction in cabaret in 2009, when I produced 20th Century Woman: The Compact Cabaret. Not wanting to neglect my love of spoken word, particularly drama and verse, I made the conscious decision to include these elements in the programme, as well as wonderful songs, to tell the story of women's changing status and preoccupations throughout the 20th Century and up to now. I was invited to audition for the renowned Cabaret Conference at Yale, run by the late legendary Erv Raible, and that was thrilled to be one of only 26 accepted that year, where I was taught by the masters of the genre. Amanda McBroom (composer of the Bette Middler hit "The Rose" and the poignant "Errol Flynn"), Laurel Massé, original member of Manhattan Transfer, Sally Mayes, Tony Award nominees Sharon McNight and Tovah Feldshuh, and New York cabaret veteran Julie Wilson were all on the faculty. We were also treated to the musical direction of Alex Rybeck, Hubert Tex Arnold and the now late Paul Trueblood. With the benefit of their insightful teaching and great encouragement, I took my show to The Duplex in New York, where I was delighted with the response. Since then, I have produced Loving London: The Capital Cabaret, using the same format of songs, poetry and drama, in various London venues, including Leicester Square Theatre and The Crazy Coqs. 2014, the centenary of World War 1, saw the launch of Wartime Women: the Khaki Cabaret to a sellout house at St. James Theatre, London, garnering great notices, including from The Times and Musical Theatre Review. I have since been touring the show to Belgium and throughout the UK. I hope these reviews and interviews entertain and educate at the same time, and if please do leave comments in the box. It's great to engage in a conversation about the Arts. Fiona-Jane Weston
View all posts by Fiona Jane Weston →
This entry was posted in Cabaret Reviews and tagged cabaret, Emma Ruth, fiona jane weston, Kitsch Kittens, Knees-up Round the Organ, Luke Meredith, Mister Meredith, Tamsyn Salter. Bookmark the permalink.