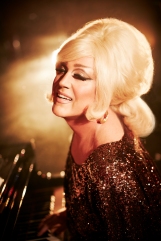 Son of actor Lionel Jeffries (Camelot, worked with Peter Sellers, director of The Railway Children) and actress Eileen Walsh, Ty grew up surrounded by artists of every genre (Fred Astaire and Danny La Rue were family friends), and steeped in the music of Gershwin, Porter et al., was exposed to examples everywhere of great artistic quality. Watching double-bills of films on TV with female icons such as Peggy Lee and Judy Garland, he was not only in awe of them, but absorbed their styles.

He received success relatively early, landing his first publishing contract at the age of 14, and later studied at the Purcell School of Music. Then, things plateau’d. There were no big hits, and like many a cabaret artist, earned his living singing in restaurants and hotels.

The birth of Miss Hope Springs was just 3 years ago, first launched at the Brighton Fringe, then winning Best Cabaret Award in 2011. It took the patronage, and faith, of restaurateur Jeremy King to give him the platform at Crazy Coqs to really develop both the character and act.

It is difficult to define the show, as to call it ‘drag’ is to mislead, and diminish it. Miss Hope Springs is a whole persona, who just happens to be female, developed as a vehicle through which the songs originate and are developed. She has a backstory, family and is a flamboyant old school Las Vegas style trouper seeking success, love and happiness- echoing Jeffries’ own Journey, and a bit like the rest of us, though larger than life and with more edge.

The show features neither covers nor lip-synch, but every song is penned by Jeffries himself in styles ranging from pop to swing and Latin. Part of what is remarkable about this artist is the sheer volume of original material he is able to produce.

Opening with lots of razzmatazz- Dusty Springfield-esque glamorous blonde wig, eyelashes, spangley costume etc, the atmosphere is set for the evening. Rather than relying on the use of ‘tricks’ and sharp put downs of difficult audience members, Miss Hope Springs remains quite soft-spoken and respectful and several of the songs reflect this more sensitive side, not least two ballads –“She’s His World” on unrequited love, and the affecting “Carnival” on loneliness and loss of identity.

Other standout numbers are “Girl In A Million” and “Funny How things Work Out”.

Every 3-4 months there is a change of programme, and the most recent is a Latin show. Throughout August, a different guest artist appears each week, and this was the turn of David Benson (currently appearing in One Man, Two Guv’nors at Theatre Royal Haymarket), who made a surprise entrance in Act 1 before being introduced and joined Jeffries again in Act 2, singing a fun vaudeville number written especially for him, complete with straw boater and plenty of showmanship.

The songs are not simply amusing ditties, though some are, but musically sophisticated pieces with good structure and carefully worked into the arc of the programme. The jokes are well timed, and the music is appropriately sung and not over-produced for the genre.

Jeffries accompanies himself on piano with skill, as well as being ably backed by Nigel Thomas on bass and Mark Aliss on percussion.

Over the months Jeffries has held this residency, the show has built up and sustained a loyal audience with houses regularly selling out, and with repeat audiences who are starting to know the songs well enough to sing them, rendering them almost standards.

The Miss Hope Springs character and show are growing both artistically and in popularity. Listening to the CD recorded some time ago, before the current show was developed, the growth in artistry and sophistication becomes particularly evident- well balanced and entertaining though the CD is. The success of the whole act is well deserved.

I am Fiona-Jane Weston and as well as being a performer myself (see website), I write reviews of and features on shows, mainly on the London cabaret and theatre scene. I have worked in theatre for many years, but decided to embark on a new direction in cabaret in 2009, when I produced 20th Century Woman: The Compact Cabaret. Not wanting to neglect my love of spoken word, particularly drama and verse, I made the conscious decision to include these elements in the programme, as well as wonderful songs, to tell the story of women's changing status and preoccupations throughout the 20th Century and up to now. I was invited to audition for the renowned Cabaret Conference at Yale, run by the late legendary Erv Raible, and that was thrilled to be one of only 26 accepted that year, where I was taught by the masters of the genre. Amanda McBroom (composer of the Bette Middler hit "The Rose" and the poignant "Errol Flynn"), Laurel Massé, original member of Manhattan Transfer, Sally Mayes, Tony Award nominees Sharon McNight and Tovah Feldshuh, and New York cabaret veteran Julie Wilson were all on the faculty. We were also treated to the musical direction of Alex Rybeck, Hubert Tex Arnold and the now late Paul Trueblood. With the benefit of their insightful teaching and great encouragement, I took my show to The Duplex in New York, where I was delighted with the response. Since then, I have produced Loving London: The Capital Cabaret, using the same format of songs, poetry and drama, in various London venues, including Leicester Square Theatre and The Crazy Coqs. 2014, the centenary of World War 1, saw the launch of Wartime Women: the Khaki Cabaret to a sellout house at St. James Theatre, London, garnering great notices, including from The Times and Musical Theatre Review. I have since been touring the show to Belgium and throughout the UK. I hope these reviews and interviews entertain and educate at the same time, and if please do leave comments in the box. It's great to engage in a conversation about the Arts. Fiona-Jane Weston
View all posts by Fiona Jane Weston →
This entry was posted in Features - Theatre and Cabaret News and tagged cabaret, Crazy Coqs, David Benson, fiona jane weston, Lionel Jeffries, London cabaret, Mark Aliss, Miss Hope Springs, Nigel Thomas, Ty Jeffries. Bookmark the permalink.