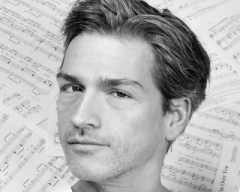 “..charming, debonaire, and displays hints of a real uniqueness to offer the London cabaret scene” – Frank Loman at The Crazy Coqs 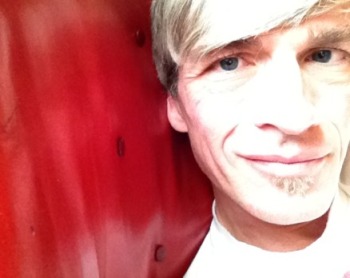 German born actor, singer and writer Frank Loman has been on the scene in Europe for at least 20 years, and here for about 15. He appears mainly in musicals, though he is not new to the cabaret scene either, having produced “Stories” at the Jermyn Street Theatre in 2000, and in 2011 took the show “Lyrical Linguists from London” and a couple of others to New York.

In this most recent production of Stories: A German Abroad, Loman uses amongst others the narrative of John Bucchino, Sondheim and German songs to explore his search for acceptance, love and success as a foreigner living abroad.

He opens in a low key way with a song of his own writing “Stories” and segués effectively into “Don’t Rain on My Parade” and a well sung version of Bucchino’s “Grateful. So far, the narrative and theme are making sense without the need for a spoken introduction, and when it does come, he is amusing, if a little ragged and slow.

There is much that is very good about this show. Loman has made some great song choices, with a carefully structured programme illustrating the story he wants to tell. Once settled and comfortable, he sings well and is entertaining throughout. He also relates to the audience and deals with hecklers charmingly.

Songs that showed his abilities best are “The Day Before You Came”, a good rocky German song “Immer Noch Zu Wenig” and a very nice version of Adele’s “Someone Like You”, which he really made his own.

He also moves well. This is noticeable in Hamlish’s “Surprise, Surprise” and Sondheim’s “Can That Boy Foxtrot”. This is an area where Loman should take courage and develop. There is more he could do with this skill.

However, where I have real issues with Loman’s work is the linking and patter, and also the persona he is trying to project. He needs to make the decision either to sing just as himself, with all the bravery and nakedness that requires, or create a character through which some of the real Loman can shine.

There is evidence in certain parts of the show, such as in “Pity the Child”, that this is a device that could work well for him, particularly if that character is rather dark. The standout song of the evening, and the work which points to a real possibility for future development, is “Dangerous Cabaret”, which opens the second, much stronger, set. The foreign language work would fit into this framework more effectively too, though I would suggest inserting a couple of English verses, especially when placing them in a run of two or more.

Making this decision would also help his links. Some of the more personal stories are delightful, giving us a glimpse of him, but need tightening. However, it is very unwise to tell us what songs are about before singing them, as he did in a section of Part 1 on relationships. Far better, and more artistic, to let the lyrics tell the narrative themselves. And strange as it may seem, avoiding spoken didacticism on audience interpretation will probably make the overall point of his story clearer.

These areas aside, this is an engaging and enjoyable show. Unobtrusively, yet excellently, accompanied by Aaron “Fingers” Clingham on piano, Loman is charming, debonaire, and displays hints of a real uniqueness in what he has to offer to the London cabaret scene. I will be interested to see future work and note the direction he takes.

I am Fiona-Jane Weston and as well as being a performer myself (see website), I write reviews of and features on shows, mainly on the London cabaret and theatre scene. I have worked in theatre for many years, but decided to embark on a new direction in cabaret in 2009, when I produced 20th Century Woman: The Compact Cabaret. Not wanting to neglect my love of spoken word, particularly drama and verse, I made the conscious decision to include these elements in the programme, as well as wonderful songs, to tell the story of women's changing status and preoccupations throughout the 20th Century and up to now. I was invited to audition for the renowned Cabaret Conference at Yale, run by the late legendary Erv Raible, and that was thrilled to be one of only 26 accepted that year, where I was taught by the masters of the genre. Amanda McBroom (composer of the Bette Middler hit "The Rose" and the poignant "Errol Flynn"), Laurel Massé, original member of Manhattan Transfer, Sally Mayes, Tony Award nominees Sharon McNight and Tovah Feldshuh, and New York cabaret veteran Julie Wilson were all on the faculty. We were also treated to the musical direction of Alex Rybeck, Hubert Tex Arnold and the now late Paul Trueblood. With the benefit of their insightful teaching and great encouragement, I took my show to The Duplex in New York, where I was delighted with the response. Since then, I have produced Loving London: The Capital Cabaret, using the same format of songs, poetry and drama, in various London venues, including Leicester Square Theatre and The Crazy Coqs. 2014, the centenary of World War 1, saw the launch of Wartime Women: the Khaki Cabaret to a sellout house at St. James Theatre, London, garnering great notices, including from The Times and Musical Theatre Review. I have since been touring the show to Belgium and throughout the UK. I hope these reviews and interviews entertain and educate at the same time, and if please do leave comments in the box. It's great to engage in a conversation about the Arts. Fiona-Jane Weston
View all posts by Fiona Jane Weston →
This entry was posted in Cabaret Reviews and tagged Aaron Clingham, cabaret, cabaret reviews London, Crazy Coqs, fiona jane weston, Frank Loman. Bookmark the permalink.