The London Ballet Company: 00 and his 7 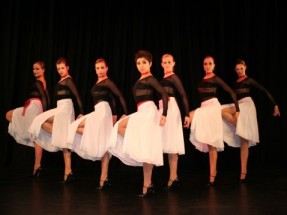 Lunchtime ballet at St. James Studio! Dancers make a brave effort to perform in tiny space. Read my review of the London Ballet Company‘s production of “00 and his 7”

London Ballet Company in 00 and His 7

I have seen ballet in many situations and forms, and was intrigued to see how the London Ballet Company  would be able to utilise the tiny space that is the St James Studio.

The mission of the company is fascinating. They specialise in bringing dance using classical technique to intimate venues, including full use of storyline rather than abstract concept. They perform at private and corporate events, as well as small theatres and employ international dancers from a variety of backgrounds. I have seen something similar with a handful of dancers, but this is a larger corp de ballet, requiring a greater degree of inventiveness to utilise every dancer in the ensemble pieces. Not many would be so brave.

The show for St James was “00 and His 7” – a gentle parody of James Bond films, using film scores and songs about the character, with James Bond and seven glamorous female dancers.

The dancers displayed strong technique and athleticism, and some showed good characterisation and story-telling skills.  Amongst the most effective uses of physical theatre techniques were the simplest, such as a beautifully effective motorbike ride and the excellent masked villain, really projecting meaning and intention through the mask and trench coat.

Other memorable moments were the well choreographed tango sequence and romantic pas de deux, bringing an air of vulnerability. Fran Mangiacasale guyed the role of James Bond well and danced expressively, especially in the drugged scene.

In terms of performance skills, however, there were areas where I felt the dancers could develop. I would have liked to see a more languid, rippling upper body movement from some of them which would have helped portray a more sensuous, sexually dangerous attitude. This character portrayal is partly achieved through a more contemporary rather than classical approach, but more importantly through an internal intention and stronger focus.

The storyline got slightly lost at times, and this too was partly due to lack of intention expressed by individual dancers in the ensemble, as well as a lack of clarity in the choreography in certain sections.

Also, the early scene with masks would be even more effective with a stronger use of head and eyes, helping create a greater sense of breadth and communication with the gallery. There was a tendency to look down a little too much, and with masks especially, it is important to project outwards.

The singer too could be put to greater use. Where the space is so intimate, even with classical singing, a greater connection with the audience, including some form of interaction would all help to welcome us in and involve us more in the piece.

None of these qualifications are insurmountable, however, and as the dancers mature as artists and the company embraces their vision ever more strongly, we will I am sure see clearer and even braver work from this company. It was certainly an entertaining way to spend a lunch hour.

All credit to St James Studio for their varied programme and experimental approach, nurturing developing companies, songwriters and artists. I look forward to seeing Stephen Luke Walker this Sunday evening.

I am Fiona-Jane Weston and as well as being a performer myself (see website), I write reviews of and features on shows, mainly on the London cabaret and theatre scene. I have worked in theatre for many years, but decided to embark on a new direction in cabaret in 2009, when I produced 20th Century Woman: The Compact Cabaret. Not wanting to neglect my love of spoken word, particularly drama and verse, I made the conscious decision to include these elements in the programme, as well as wonderful songs, to tell the story of women's changing status and preoccupations throughout the 20th Century and up to now. I was invited to audition for the renowned Cabaret Conference at Yale, run by the late legendary Erv Raible, and that was thrilled to be one of only 26 accepted that year, where I was taught by the masters of the genre. Amanda McBroom (composer of the Bette Middler hit "The Rose" and the poignant "Errol Flynn"), Laurel Massé, original member of Manhattan Transfer, Sally Mayes, Tony Award nominees Sharon McNight and Tovah Feldshuh, and New York cabaret veteran Julie Wilson were all on the faculty. We were also treated to the musical direction of Alex Rybeck, Hubert Tex Arnold and the now late Paul Trueblood. With the benefit of their insightful teaching and great encouragement, I took my show to The Duplex in New York, where I was delighted with the response. Since then, I have produced Loving London: The Capital Cabaret, using the same format of songs, poetry and drama, in various London venues, including Leicester Square Theatre and The Crazy Coqs. 2014, the centenary of World War 1, saw the launch of Wartime Women: the Khaki Cabaret to a sellout house at St. James Theatre, London, garnering great notices, including from The Times and Musical Theatre Review. I have since been touring the show to Belgium and throughout the UK. I hope these reviews and interviews entertain and educate at the same time, and if please do leave comments in the box. It's great to engage in a conversation about the Arts. Fiona-Jane Weston
View all posts by Fiona Jane Weston →
This entry was posted in Dance Reviews, Theatre Reviews and tagged 00 and his 7, 00 and his 7 review, ballet review, fiona jane weston, Fran Mangiacasale. James Bond, London Ballet Company, lunchtime ballet, Lunchtime Theatre, St james Studio. Bookmark the permalink.