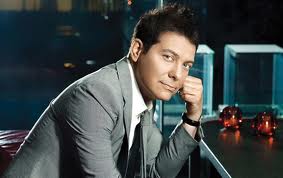 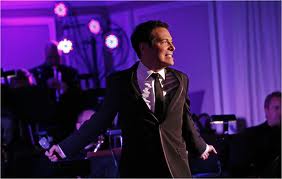 The London Festival Of Cabaret has triumphed again, this time with its flagship show Michael Feinstein and Friends at The Palace Theatre.

Right from the opening number, “Luck Be a Lady” it was clear that this man has risen to the top of the U.S. cabaret tree for a reason. Even if audience members were unaware of Feinstein’s history and contribution to knowledge of the Great American Songbook, his charm, well produced voice and excellent phrasing signalled the quality of the evening to come.

Feinstein has worked with the masters of the Songbook for many years, including Ira Gershwin and Jerry Herman. As such, he feels a duty to share the work as widely as possible, and has recently published a coffee –table book on the Gershwins with previously unpublished photos. His deep fund of knowledge is not merely an archive of past riches. His understanding of the material and genuine love and pride he takes in the songs, helps bring into focus their contemporary relevance.

He also made his debut this year as principle conductor of the Pasadena Pops Orchestra, and has a cabaret room in his own name, “Feinstein’s”, which has recently moved from New York to Los Angeles.

Equally at home in small spaces, where he is famed for his skilful self-accompaniment on the piano, here in the cavernous Palace Theatre, he presented a big band style of jazz-swing material with a 7-piece band comprising of a rhythm section and two brass players.

On the subject of the band, the sound quality of the show deserves special mention. All too often in large venues, the volume is pushed up far too high changing the whole dynamics of the evening from cabaret to pop concert. In this show, the balance was perfect – each instrument clearly defined, avoiding overwhelming the singer whilst providing a full body of sound. I also noticed the discrete and seamless transition between Feinstein’s piano playing and the craftsmanship of band leader Clive Dunstall.

Feinstein is not a big belter, but sings with open throat, strong technique and exemplary breath control. Stand out songs were his tender rendition of “I Won’t Send Roses”, swing ballad “You Go To My Head” and witty presentation of “I Love A Piano”, complete with Liberace impression.

He further showed off his amusing mimicry ‘introducing’ us to Louis Armstrong and the late American comic Paul Lynde. His repartee with the audience is informative, relaxed and entertaining, with no end of priceless anecdotes to share about Broadway and the great songwriters.

He was later joined by his guests, West End actor and recent addition to “Downton Abbey” Julien Ovenden, who sang a couple of lesser known melancholic Noel Coward numbers well suited to his fine tenor voice, and Elaine Paige, a long time friend of Feinstein, who demonstrated in her swing version of “Blue Skies” that she is no stranger to the jazz idiom herself.

Also included was a Gershwin requests section where audience called out songs they wanted to hear and Feinstein created a compilation out of his head on the spot – no mean feat, given the Gershwins wrote about 1200 songs!

Feinstein will return to London next year with a programme on Leonard Bernstein. See him if you can – it is a rare treat as well as an education.

I am Fiona-Jane Weston and as well as being a performer myself (see website), I write reviews of and features on shows, mainly on the London cabaret and theatre scene. I have worked in theatre for many years, but decided to embark on a new direction in cabaret in 2009, when I produced 20th Century Woman: The Compact Cabaret. Not wanting to neglect my love of spoken word, particularly drama and verse, I made the conscious decision to include these elements in the programme, as well as wonderful songs, to tell the story of women's changing status and preoccupations throughout the 20th Century and up to now. I was invited to audition for the renowned Cabaret Conference at Yale, run by the late legendary Erv Raible, and that was thrilled to be one of only 26 accepted that year, where I was taught by the masters of the genre. Amanda McBroom (composer of the Bette Middler hit "The Rose" and the poignant "Errol Flynn"), Laurel Massé, original member of Manhattan Transfer, Sally Mayes, Tony Award nominees Sharon McNight and Tovah Feldshuh, and New York cabaret veteran Julie Wilson were all on the faculty. We were also treated to the musical direction of Alex Rybeck, Hubert Tex Arnold and the now late Paul Trueblood. With the benefit of their insightful teaching and great encouragement, I took my show to The Duplex in New York, where I was delighted with the response. Since then, I have produced Loving London: The Capital Cabaret, using the same format of songs, poetry and drama, in various London venues, including Leicester Square Theatre and The Crazy Coqs. 2014, the centenary of World War 1, saw the launch of Wartime Women: the Khaki Cabaret to a sellout house at St. James Theatre, London, garnering great notices, including from The Times and Musical Theatre Review. I have since been touring the show to Belgium and throughout the UK. I hope these reviews and interviews entertain and educate at the same time, and if please do leave comments in the box. It's great to engage in a conversation about the Arts. Fiona-Jane Weston
View all posts by Fiona Jane Weston →
This entry was posted in Cabaret Reviews and tagged Amercian Songbook, cabaret, cabaret reviews London, Clive Dunstall, Elaine Paige, fiona jane weston, George Gershwin, Ira Gershwin, London cabaret, London Festival of Cabaret, Michael Feinstein. Bookmark the permalink.

2 Responses to Michael Feinstein and Friends