An Intimate Evening with Ruthie Henshall

Musical theatre performer Ruthie Henshall sings in her own show at the beautiful Cadogan Hall. 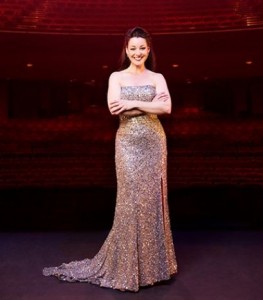 In the beautiful setting of the Cadogan Hall, more well-known for its classical and jazz performances than musical theatre work, multiple Olivier Award nominated star of the West End and Broadway stages Ruthie Henshall presented her collection of songs from shows she has either appeared in or illustrate an aspect of her life.

Opening the show in style , she made her entrance in a figure hugging sparkling gown singing a bluesy arrangement of “A Hard Day’s Night” and then went on to further warm the audience up with her great belt voice in “Don’t Rain on My Parade”.

The evening is well structured with a mixture of musical theatre material and more contemporary work, well held together with stories of personal incidents in her life, which keep us interested and wanting to know more about her.

Musically, whilst most at home with the Gershwin material from Crazy For You and her signature piece from Les Misérables “I Dreamed A Dream”, she also proffers some original takes on other musical theatre standards, such as Sondheim’s “Send in the Clowns” and, interestingly, ”Electricity” from Billy Elliott.

The second half has more of a pop concert feel to it, not only because of the material, but the vocal style and delivery of guest artist Kerry Ellis, whom Henshall originally met at a Masterclass.

The first few songs here were over-amplified. In general, the sound quality was the let-down of the show with the instruments frequently overpowering the vocals, especially on the artist’s lower notes. The lighting was, for the most part, very effective, though it too was over obtrusive at times, which took away from the intimate feel Henshall wanted to create (hence, the title of the show).

The one song I felt was only partially successful was the character piece “The Siren Song”. This started very well with great promise of showing Henshall’s comedy acting ability, but became rather overdone and forced. This lapse, though, was more than made up for by a beautiful and creative rendition of Joni Mitchell’s “Both Sides Now”, and rousing finale of Billy Joel’s “I’ve Loved These Days”.

This is a polished and very assured performance, keeping the audience engaged and entertained throughout. Wisely, given the size of the venue, she kept her singing very much ‘sung’ throughout, rather than using the speech quality more appropriate for a smaller cabaret setting. It would be interesting to see how this veteran of big musicals adapts her performance style to really intimate venues.

Ruthie Henshall was excellently accompanied by MD Paul Schofield on piano, Lewis Andrews on bass/guitar and Steve Maclachlan on drums.

I am Fiona-Jane Weston and as well as being a performer myself (see website), I write reviews of and features on shows, mainly on the London cabaret and theatre scene. I have worked in theatre for many years, but decided to embark on a new direction in cabaret in 2009, when I produced 20th Century Woman: The Compact Cabaret. Not wanting to neglect my love of spoken word, particularly drama and verse, I made the conscious decision to include these elements in the programme, as well as wonderful songs, to tell the story of women's changing status and preoccupations throughout the 20th Century and up to now. I was invited to audition for the renowned Cabaret Conference at Yale, run by the late legendary Erv Raible, and that was thrilled to be one of only 26 accepted that year, where I was taught by the masters of the genre. Amanda McBroom (composer of the Bette Middler hit "The Rose" and the poignant "Errol Flynn"), Laurel Massé, original member of Manhattan Transfer, Sally Mayes, Tony Award nominees Sharon McNight and Tovah Feldshuh, and New York cabaret veteran Julie Wilson were all on the faculty. We were also treated to the musical direction of Alex Rybeck, Hubert Tex Arnold and the now late Paul Trueblood. With the benefit of their insightful teaching and great encouragement, I took my show to The Duplex in New York, where I was delighted with the response. Since then, I have produced Loving London: The Capital Cabaret, using the same format of songs, poetry and drama, in various London venues, including Leicester Square Theatre and The Crazy Coqs. 2014, the centenary of World War 1, saw the launch of Wartime Women: the Khaki Cabaret to a sellout house at St. James Theatre, London, garnering great notices, including from The Times and Musical Theatre Review. I have since been touring the show to Belgium and throughout the UK. I hope these reviews and interviews entertain and educate at the same time, and if please do leave comments in the box. It's great to engage in a conversation about the Arts. Fiona-Jane Weston
View all posts by Fiona Jane Weston →
This entry was posted in Cabaret Reviews and tagged Cadogan Hall, Kerry Ellis, Lewis Andrews, Paul Schofield, Ruthie Henshall, Steve Maclachlan. Bookmark the permalink.