Sophie-Louise Dann: ‘From Classic… to… Coward to Current…’’ 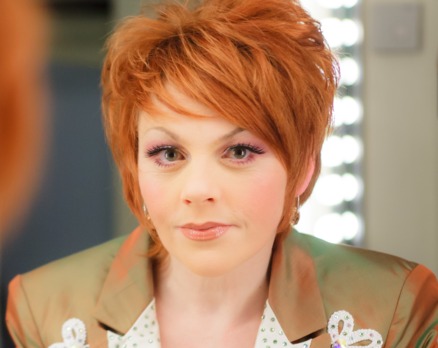 Sophie-Louise Dann has recently been seen in London in Ivor Novello’s “Gay’s the Word” at Jermyn St and has just finished a run at the Théâtre du Châtelet in Paris of Stephen Sondheim’s “Sunday in the Park with George”. She is well known in the West End for her roles in Lend Me a Tenor (which garnered her an Olivier Award nomination) and Forbidden Broadway!, and also for her work in light opera, most particularly with the D’Oyly Carte.

While she has previously performed From Classic… to Coward… to Current in New York and Los Angeles, this run at The Crazy Coqs is the first time London audiences have had a chance to see the show.

Starting with a foodie theme, her opening two songs, Stephen Schwartz’s ‘It’s An Art’ (about a bad waitress) and Cole Porter’s ‘Tale of the Oyster’, reveal that Dann not only has a humorous, quirky quality to her personality, but her impressive vocal range and agility. She moves easily through all registers and styles from belt to opera in one song to express the narrative paths she wants to follow.

There is more comedic material to come, including a lovely original number, Jason Carr’s ‘Three Whole Days’, and a sprinkling of Sondheim material. During a few moments respite from the laughs, there are renditions of ‘A Nightingale Sang in Berkeley Square’, a tender Noel Coward medley ‘Why Does Love Get in the Way?’/‘If Love Were All’, and a well-sung version of Kurt Weill and Ogden Nash’s ‘I’m A Stranger Here Myself’.

The second half has a different feel to it, opening somewhat surprisingly with the folksy classic ‘The Singer’ and a standout number, ‘Back to Before’ from Ragtime. In some ways deliberately less reliant on comic work, this is the stronger set, less repetitive in terms of mood and enabling us to see the range this artist is capable of.

More original works are featured from as yet relatively unknown contemporary songwriters, including Helen Goldwyn’s ‘World’s Biggest Fan’, the exuberant tour-de-force whistle-stop anthem of West End and Broadway, and Tim Sutton’s self-deprecating ‘How do you Like?…’

Along with traditional cabaret fare, such as a beautifully soulful ‘Moon River’, this better balanced half still includes funny numbers, not least Lee and Weston’s ‘The Gypsy Warned Me’, boosted by some slick lighting adding to the comic effect (credit to resident technician Justin Smith).

Dann’s pianist James Church plays with skill and sensitivity. There were a few first night hiccups when performer and musician were a little out of sync with one another, but they in no way marred one’s enjoyment of this delightful artist.

I am Fiona-Jane Weston and as well as being a performer myself (see website), I write reviews of and features on shows, mainly on the London cabaret and theatre scene. I have worked in theatre for many years, but decided to embark on a new direction in cabaret in 2009, when I produced 20th Century Woman: The Compact Cabaret. Not wanting to neglect my love of spoken word, particularly drama and verse, I made the conscious decision to include these elements in the programme, as well as wonderful songs, to tell the story of women's changing status and preoccupations throughout the 20th Century and up to now. I was invited to audition for the renowned Cabaret Conference at Yale, run by the late legendary Erv Raible, and that was thrilled to be one of only 26 accepted that year, where I was taught by the masters of the genre. Amanda McBroom (composer of the Bette Middler hit "The Rose" and the poignant "Errol Flynn"), Laurel Massé, original member of Manhattan Transfer, Sally Mayes, Tony Award nominees Sharon McNight and Tovah Feldshuh, and New York cabaret veteran Julie Wilson were all on the faculty. We were also treated to the musical direction of Alex Rybeck, Hubert Tex Arnold and the now late Paul Trueblood. With the benefit of their insightful teaching and great encouragement, I took my show to The Duplex in New York, where I was delighted with the response. Since then, I have produced Loving London: The Capital Cabaret, using the same format of songs, poetry and drama, in various London venues, including Leicester Square Theatre and The Crazy Coqs. 2014, the centenary of World War 1, saw the launch of Wartime Women: the Khaki Cabaret to a sellout house at St. James Theatre, London, garnering great notices, including from The Times and Musical Theatre Review. I have since been touring the show to Belgium and throughout the UK. I hope these reviews and interviews entertain and educate at the same time, and if please do leave comments in the box. It's great to engage in a conversation about the Arts. Fiona-Jane Weston
View all posts by Fiona Jane Weston →
This entry was posted in Cabaret Reviews and tagged cabaret, cabaret reviews London, Crazy Coqs, fiona jane weston, James Church, Jason Carr, London cabaret, sohie Louise Dann. Bookmark the permalink.