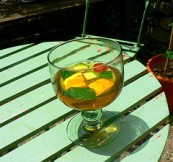 “..quite a different feel to the first..project is well worth pursuing…theme could go in a number of different directions”

Laura Davis has produced a second programme of her revue show ‘Lush Life’ in St James Studio, this time with some newcomers to the show.

Hostess Valerie Cutko kicked off the evening with her self-penned song ‘Baby, You’re the Cocktail For Me’ espousing her happiness in no longer drinking and better relationships. This was the song’s first public airing as well as the first item of the evening, and therefore an exceedingly brave choice to open the show with, but although I noticed she was nervous, Valerie’s experience came to the fore and it came over well.

She introduced new guest from Minneapolis Doug Anderson who made his London debut tonight. Whilst his nerves got the better of his memory a couple of times, his voice and excellent movement skills make him an entertaining artist to watch and the audience enjoyed him. His real moment to shine, though, came in Act II with a very funny rendition of ‘The Morning After’.

The splendidly over the top Champagne Charlie and Lowri-Ann Rchards appeared again from the first programme, this time with Lowri-Ann giving a first-rate performance of ‘Only a Glass of Champagne’ and Charlie trying out his new Champagne songs medley. Much of this was fun, though it went on a tad too long. Rather than cutting numbers, however, I would like to see him add even more songs to it, of different genres including ballads, and crafting it into two parts. This would enable him to display his broad range of style and good vocal technique in a better light.

Also featured was Romanian artist Manooka, singing songs in her own language accompanied by an accordionist and violinist, providing a drinking round the Gypsy campfire atmosphere. That she drew such good response from the audience, given the language barrier, is testament to her skill as an entertainer. We were able to relate to her work, though it would have been better still had she given us a little more translation along the way. She was aided in Act II by a couple of charming marionettes.

Historical debauchery came in the guise of Miss Ginger Blush as an a naive English Rose unable to keep her clothes on in Act 1 and a Restoration actress in breeches quoting Rochester in Act II. The burlesque number is genuinely funny and, whist I welcome the inclusion of Restoration poetry, this item needs refining. Also, because the artist removed her clothes in Act I, the audience were a little confused in Act II when she did not do so. Swapping these items would have served them better.

Paul Ibell provided more poetry with his original pieces on Princess Margaret and Margaret Thatcher. These were interesting and drew good response from the audience. A way to make them even better would be for Paul to develop his recitation skills with more characterisation and a stronger sense of pulse, especially in plain text work with no rhyme structure, such as the Princess Margaret piece.

It was very welcome to see Miss Hope Springs with a polished and refined medley of original work, party girl  Michelle LaFortune sent us out of Act I on a high, and I must mention one song in particular from Valerie Cutko. Her offering of Kurt Weill’s ‘Alabama Song’ with its haunting chorus and tense refrain was a masterclass on the genre.

This ‘Second Round’ had quite a different feel to the first, staged a couple of months ago. The subject matter (drinking) was of course the same, and again both songs and poetry featured, but it lacked the tighter structure of the first show. Whereas the previous show was largely a celebration of drink in the first half and an exploration of the less happy effects of alcohol in Act II, this programme was more of a random collection of material, much of it either performed for the first time or by someone new to London.

Whilst I applaud the bravery of so much new work, it did present the producer with certain difficulties. Some elements ran too long and others felt under-developed, and the overall structure of the evening was not strong enough to carry the new elements as well as it could have. To work at its best, the show requires tighter knitting together, both of the individual acts and of the running order. The evening as a whole would benefit from having fewer elements, with those elements more judiciously chosen and individually honed. That way, premiered works can be placed securely within the safety net of the seasoned pieces while artists play new works in, and the surprises can keep the audience dazzled and delighted.

Nevertheless, this was an enjoyable evening and the project is well worth pursuing. The theme could go in a number of different directions and there is no shortage of talent to bring something valuable to the show. I wish Laura well with it.

I am Fiona-Jane Weston and as well as being a performer myself (see website), I write reviews of and features on shows, mainly on the London cabaret and theatre scene. I have worked in theatre for many years, but decided to embark on a new direction in cabaret in 2009, when I produced 20th Century Woman: The Compact Cabaret. Not wanting to neglect my love of spoken word, particularly drama and verse, I made the conscious decision to include these elements in the programme, as well as wonderful songs, to tell the story of women's changing status and preoccupations throughout the 20th Century and up to now. I was invited to audition for the renowned Cabaret Conference at Yale, run by the late legendary Erv Raible, and that was thrilled to be one of only 26 accepted that year, where I was taught by the masters of the genre. Amanda McBroom (composer of the Bette Middler hit "The Rose" and the poignant "Errol Flynn"), Laurel Massé, original member of Manhattan Transfer, Sally Mayes, Tony Award nominees Sharon McNight and Tovah Feldshuh, and New York cabaret veteran Julie Wilson were all on the faculty. We were also treated to the musical direction of Alex Rybeck, Hubert Tex Arnold and the now late Paul Trueblood. With the benefit of their insightful teaching and great encouragement, I took my show to The Duplex in New York, where I was delighted with the response. Since then, I have produced Loving London: The Capital Cabaret, using the same format of songs, poetry and drama, in various London venues, including Leicester Square Theatre and The Crazy Coqs. 2014, the centenary of World War 1, saw the launch of Wartime Women: the Khaki Cabaret to a sellout house at St. James Theatre, London, garnering great notices, including from The Times and Musical Theatre Review. I have since been touring the show to Belgium and throughout the UK. I hope these reviews and interviews entertain and educate at the same time, and if please do leave comments in the box. It's great to engage in a conversation about the Arts. Fiona-Jane Weston
View all posts by Fiona Jane Weston →
This entry was posted in Cabaret Reviews and tagged cabaret, cabaret reviews London, fiona jane weston, St james Theatre. Bookmark the permalink.