Anna Bergman “You and The Night and The Music: An Evening of Musical Imports and Exports”

A woman from a diplomatic childhood creates  a cabaret of songs representing all the cultures she grew up with – American Songbook, Viennese opera, French chansons. 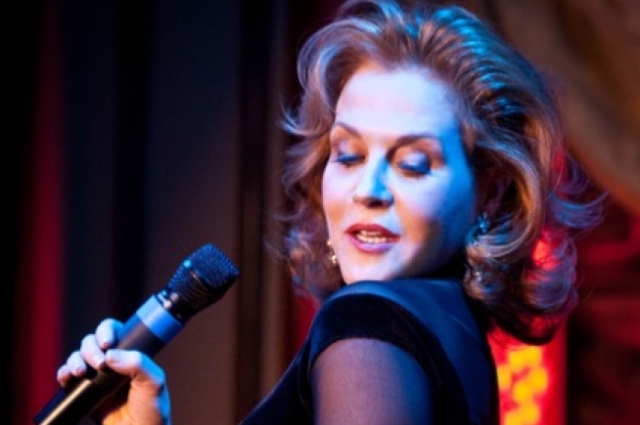 “…a shiver literally ran down my spine…the epitome of glamour..”

Lyric soprano Anna Bergman is a highly polished New York based daughter of diplomatic parents, and this show is a collection of songs representing all the cultures she embraces – American Songbook, Viennese opera, French chansons and some contemporary work too. The show was premièred last year under the directorship of Jeff Harner (interestingly his first direction of cabaret) and the musical direction of the excellent Alex Rybeck.

Part of Anna’s signature as a performer is not only her great range, but her knowledge of languages and her opening song Arthur Schwartz’s ‘You and The Night and The Music’ ended with the last verse in Spanish, straight away setting her desired tone for the evening.

Having been born in Paris, she loves all things French and as well as a sultry rendition of Cole Porter’s I Love Paris’, she gave us ‘Sous le Ciel de Paris’ showing her voice very well. In line with her objectives for the show, several of the songs were sung partially in one of the languages she speaks, but she deftly avoided alienating her audience by using various means to make sure we had some understanding of the lyrics.

Growing up abroad, Anna learned to appreciate the music of her own country in Vienna listening to her parents’ record collection. But it was here also, she discovered the fascinating wartime story of Marlene Dietrich. Having renounced Nazism, Dietrich sang American songs in German to German soldiers on the radio for propaganda purposes and Anna sang to us one of those songs, ‘Sei Lieb Zu Mir (Mean To Me)’ adopting Dietrich’s lower register and speech quality.

The song of the evening for me, though, was Franz Lehar’s ‘Vilia’. This music is really where Anna shines – a shiver literally ran down my spine.

A medley of John Denver’s ‘Leaving on a Jet Plane’ and Carol king’s ‘So Far Away’ was included, and although not her natural milieu, showed she can sing this material effectively by using the lyrics and singing with feeling. Also, after an amusing description of seeing an Arab prince presenting to his bride some knockout jewels, she went on to sing a set of American Songbook works on finding her ‘ideal’ – rich- prince, which certainly showed the athleticism of her voice, particularly in the higher register.

However, her real artistry was displayed in the dramatic ‘Fable’ from Adam Guettel’s ‘The Light in The Piazza’. Her story-telling skills rendered this song outstanding.

Piano accompaniment was provided by the very competent Nathan Martin whom, it transpired, had accompanied her on a most mysterious engagement in Moscow a couple of years ago.

With her diplomatic upbringing, good looks, wonderful dresses and lifestyle of exotic travel meeting royalty and other extraordinary people, Anna Bergman is the epitome of glamour. Her chosen songs and personal style all contribute to create this feel and The Crazy Coqs provides the ideal setting.

I am Fiona-Jane Weston and as well as being a performer myself (see website), I write reviews of and features on shows, mainly on the London cabaret and theatre scene. I have worked in theatre for many years, but decided to embark on a new direction in cabaret in 2009, when I produced 20th Century Woman: The Compact Cabaret. Not wanting to neglect my love of spoken word, particularly drama and verse, I made the conscious decision to include these elements in the programme, as well as wonderful songs, to tell the story of women's changing status and preoccupations throughout the 20th Century and up to now. I was invited to audition for the renowned Cabaret Conference at Yale, run by the late legendary Erv Raible, and that was thrilled to be one of only 26 accepted that year, where I was taught by the masters of the genre. Amanda McBroom (composer of the Bette Middler hit "The Rose" and the poignant "Errol Flynn"), Laurel Massé, original member of Manhattan Transfer, Sally Mayes, Tony Award nominees Sharon McNight and Tovah Feldshuh, and New York cabaret veteran Julie Wilson were all on the faculty. We were also treated to the musical direction of Alex Rybeck, Hubert Tex Arnold and the now late Paul Trueblood. With the benefit of their insightful teaching and great encouragement, I took my show to The Duplex in New York, where I was delighted with the response. Since then, I have produced Loving London: The Capital Cabaret, using the same format of songs, poetry and drama, in various London venues, including Leicester Square Theatre and The Crazy Coqs. 2014, the centenary of World War 1, saw the launch of Wartime Women: the Khaki Cabaret to a sellout house at St. James Theatre, London, garnering great notices, including from The Times and Musical Theatre Review. I have since been touring the show to Belgium and throughout the UK. I hope these reviews and interviews entertain and educate at the same time, and if please do leave comments in the box. It's great to engage in a conversation about the Arts. Fiona-Jane Weston
View all posts by Fiona Jane Weston →
This entry was posted in Cabaret Reviews and tagged Alex Rybeck, American Songbook, Anna Bergman, fiona jane weston, French chansons, Jeff Harner, London cabaret reviews, London theatre, The Crazy coqs, Viennese opera. Bookmark the permalink.