Stacy Sullivan sang her tribute cabaret to the immortal Peggy Lee at The Crazy Coqs for some of he great lady’s family!  Read it here

“..sings jazz numbers in the way.. jazz should be sung in a cabaret setting”

Award –winning singer Stacy Sullivan premièred her tribute to the great Peggy Lee last night, bringing to us some of the work that has taken such prominent place in jazz and popular music over six decades.

Stacy Sullivan is cabaret artist KT Sullivan’s sister, the 7th child of a large, noisy and very musical family.  Perhaps uncharacteristically, she started her show quietly, unaccompanied with the piano and double bass gradually joining her later in Lee and Barbour’s ‘I Don’t Know Enough About You’, finishing unexpectedly with a blackout.  This arresting effect set the atmosphere for the evening.

Stacy makes good use of drama and soundscape, certainly for the first half of the show, with the musicians using their instruments to build the sound of trains, which played a significant role in Peggy Lee’s life, leading to a jazz medley of ‘I Got Rhythm’ and ‘My Romance’.

Being a tribute, we learned things about Peggy Lee along the way, including how she developed a wiggle – she was self-conscious about her hands, apparently, and held them behind her back.

Whilst Stacy sang many of the Lee standards one expects, there were also some unusual gems rarely heard.  One that particularly stood out was the passionate, searching ‘Where Did They Go?’ by Harry Lloyd and Gloria Sklerov released towards the end of her career.  It had a peculiarly European flavour to it, almost Weimar, and I learned from Musical Director Jon Weber that it had in fact been done in German at one time.

Stacy is a lovely performer to watch- very assured and understated.  The more dramatic numbers suited her particularly well, and she often put that stamp onto some of Lee’s better known songs such as the usually gentle and reflective ‘Johnny Guitar’.

Her musicians, pianist Jon Weber and bass player Steve Doyle, did her justice with excellent arrangements and accompanied with sensitivity, as well as playing good solos.

Stacy conveyed Lee’s courage, strength and sexuality most effectively. Another dimension she might like to add is a greater portrayal of Lee’s dry acerbic wit to create a more balanced tribute.   She sings jazz numbers in the way I feel jazz should be sung in a cabaret setting.  She was communicative, employing both the lyrics and play on rhythm and tempo to tell the story.  A good example was Irving Berlin’s ‘Cheek to Cheek’ rendered soft and sexy, moving into an upbeat swing, and returning to a sensuous style, all the time playing with the musicians, both in terms of performance and musicality. 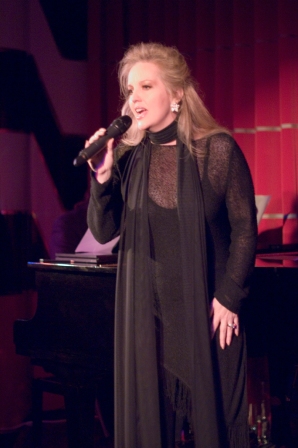 I am Fiona-Jane Weston and as well as being a performer myself (see website), I write reviews of and features on shows, mainly on the London cabaret and theatre scene. I have worked in theatre for many years, but decided to embark on a new direction in cabaret in 2009, when I produced 20th Century Woman: The Compact Cabaret. Not wanting to neglect my love of spoken word, particularly drama and verse, I made the conscious decision to include these elements in the programme, as well as wonderful songs, to tell the story of women's changing status and preoccupations throughout the 20th Century and up to now. I was invited to audition for the renowned Cabaret Conference at Yale, run by the late legendary Erv Raible, and that was thrilled to be one of only 26 accepted that year, where I was taught by the masters of the genre. Amanda McBroom (composer of the Bette Middler hit "The Rose" and the poignant "Errol Flynn"), Laurel Massé, original member of Manhattan Transfer, Sally Mayes, Tony Award nominees Sharon McNight and Tovah Feldshuh, and New York cabaret veteran Julie Wilson were all on the faculty. We were also treated to the musical direction of Alex Rybeck, Hubert Tex Arnold and the now late Paul Trueblood. With the benefit of their insightful teaching and great encouragement, I took my show to The Duplex in New York, where I was delighted with the response. Since then, I have produced Loving London: The Capital Cabaret, using the same format of songs, poetry and drama, in various London venues, including Leicester Square Theatre and The Crazy Coqs. 2014, the centenary of World War 1, saw the launch of Wartime Women: the Khaki Cabaret to a sellout house at St. James Theatre, London, garnering great notices, including from The Times and Musical Theatre Review. I have since been touring the show to Belgium and throughout the UK. I hope these reviews and interviews entertain and educate at the same time, and if please do leave comments in the box. It's great to engage in a conversation about the Arts. Fiona-Jane Weston
View all posts by Fiona Jane Weston →
This entry was posted in Cabaret Reviews and tagged cabaret reviews London, fiona jane weston, Jon Weber, KT Sullivan, London theatrecoqs, Stacy Sullivan, Steve Doyle, The Crazy coqs. Bookmark the permalink.